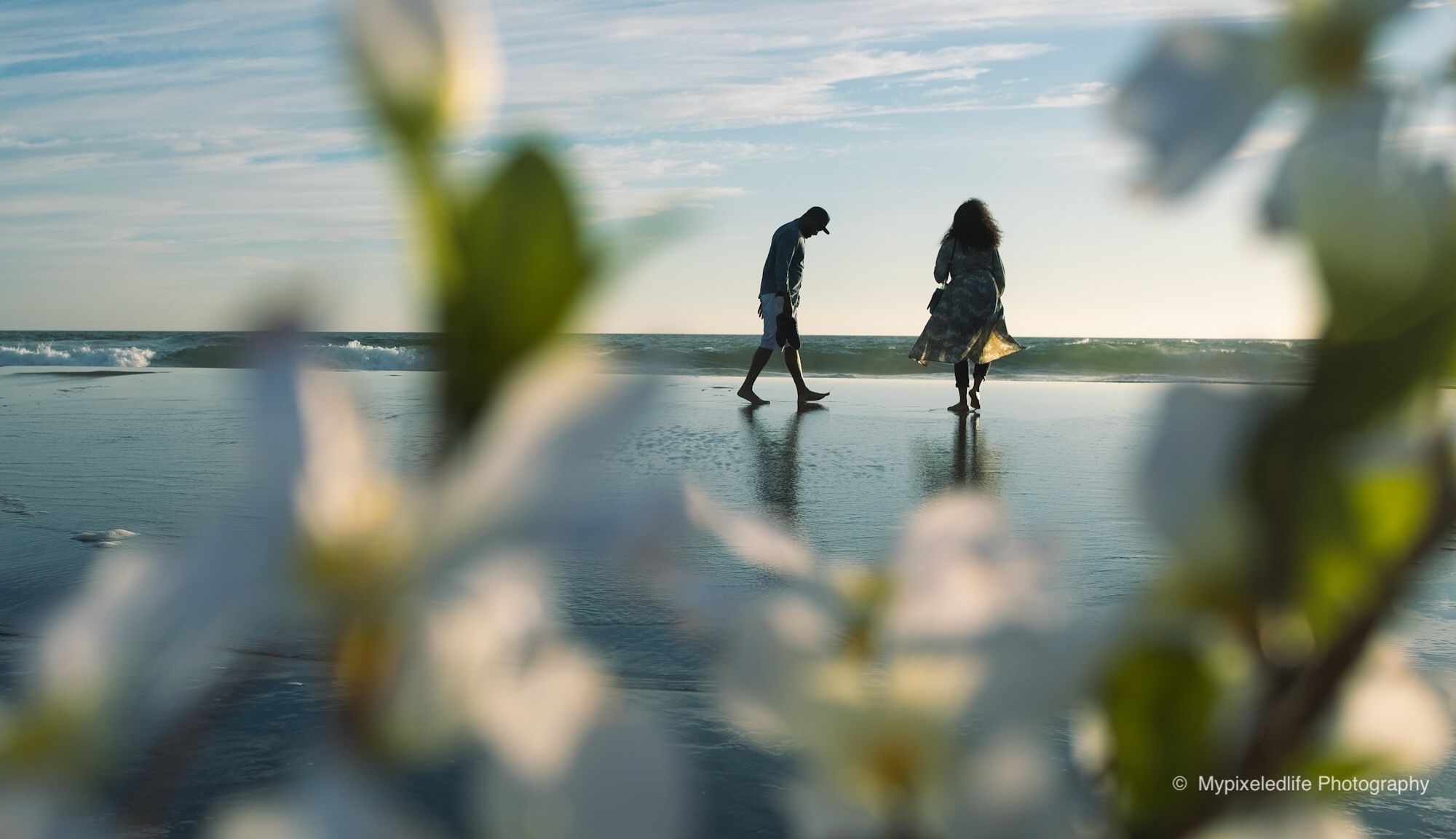 “Are you the one who is to come, or shall I look for another?” This was a surprising question coming from John the Baptist.

It’s unclear exactly when John first consciously knew that Jesus was the Son of God, whose way he had come to prepare. The Apostle John quotes him as saying, “I myself did not know him” (John 1:31) around the time he baptized Jesus.

That day had also marked the beginning of the end of his ministry. From that point he had joyfully directed people away from himself to follow Jesus.

However, later, as recorded in Matthew 11:3 and Luke 7:19, John the Baptist sent messengers to Jesus to ask Him, “Are you the one who is to come, or should we expect someone else?”

But now John sat in a filthy prison. He had expected this. Prophets who rebuke sinful kings usually do not fare well. Unfortunately, he had not been an exception. Herodias wanted him dead. John could see no reason why she would be denied her wish.

What he hadn’t expected was to be tormented by such oppressive doubts and fears. It felt as if God had left him and the devil himself had taken his place. He tried to recall all the prophecies and signs that had seemed so clear to him before. But it was difficult to think straight. Comfort just wouldn’t stick to his soul. Doubts buzzed around his brain like the flies around his face. Stuck alone in this putrid cell he was assaulted by horrible, accusing thoughts. What if he had been wrong? What made him so sure that he wasn’t one?

But even with his doubts, there remained in John a deep, unshakable trust in Jesus. Jesus would tell him the truth. He just needed to hear from him again.  So he sent two of his closest disciples to ask Jesus, “Are you the one who is to come, or shall we look for another?”

Jesus was familiar with John’s sorrows and grief and the satanic storms that break on the saints when they are weak and alone. He loved John.

So he invited John’s faithful friends to sit near him as he healed many and delivered many from demonic prisons.

Then he turned to them with kind tears glistening in his eyes and said, “Tell John what you have seen and heard: the blind receives their sight, the lame walk, lepers are cleansed, and the deaf hear, the dead are raised up and the poor have the gospel preached to them.” John would recognize Isaiah’s prophecy in those words. 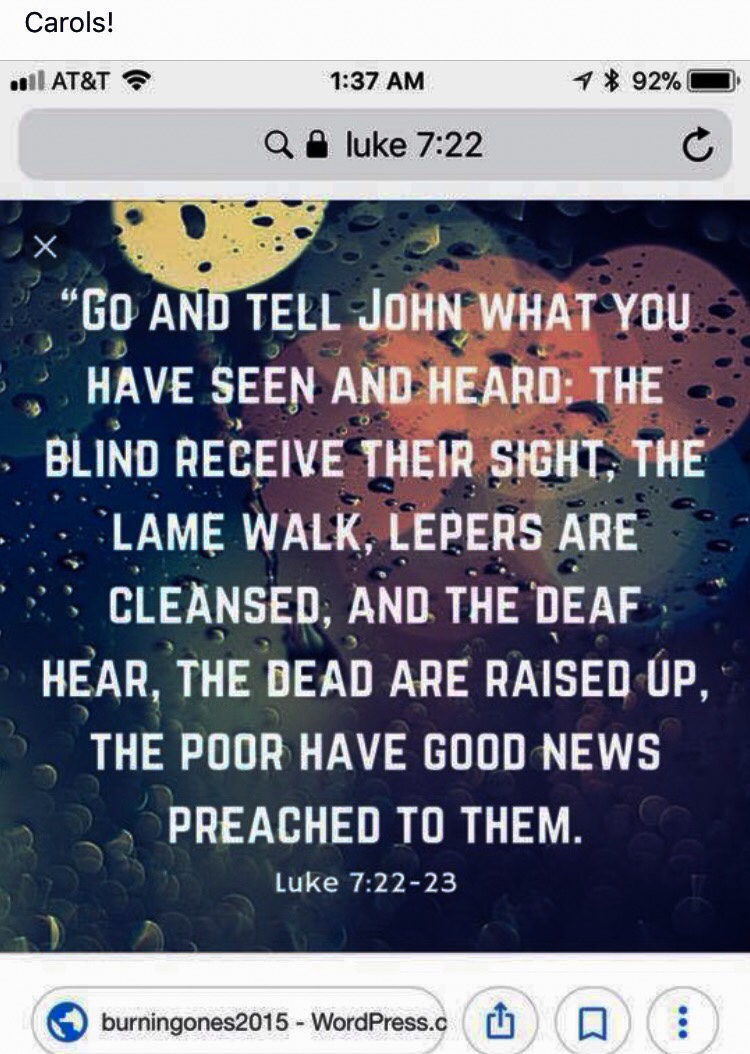 This promise would bring the peace John needed to sustain him for the few difficult days he had remaining.

Out of love for his friend, Jesus didn’t include Isaiah’s phrase “proclaim liberty to the captives.” John would understand. When Jesus had sent John’s disciples away, he said something stunning about John: no one born of women had ever been greater. This, right after John questioned who Jesus was.

In this age, even the greatest, strongest saints experience deep darkness. None of us are spared sorrow or satanic oppression. Most of us suffer agonizing affliction at some point. Most of us will experience seasons when we feel as if we’ve been abandoned. Most of us will die hard deaths.

The Savior does not break the bruised reed.

It is NOT the way of Jesus to crush the weakest person or to snuff out the smallest hope – Isaiah 42:3

There was no rebuke of John the Baptist from Jesus. Jesus knew John, loved John, and understood the trial John was enduring. Jesus’ response to John the Baptist’s doubt is a perfect example of Matthew 12:20, “A bruised reed he will not break, and a smoldering wick he will not snuff out.”

He hears our pleas for help and is patient with our doubts. He does not condemn us. He has paid completely for any sin that is exposed in our pain.

To deal with our doubts, we must submit our hearts to God’s revelation about Jesus Christ and hold to it in spite of our difficult circumstances.

He does not always answer with the speed we desire, nor is his answer always the deliverance we hope for. But he will always send the help that is needed. His grace will always be sufficient for those who trust him. The hope we taste in the promises we trust will often be the sweetest thing we experience in this age. And his reward will be beyond our imagination.

I have been where Peter was many times, struggling with a hard saying of Jesus or a difficult personal matter that seems to undermine the truth of God’s Word. I have had to go back to the basics and ask, “Where else can I go? I know that Jesus is who He claimed to be. He is the promised Messiah. He is the only Savior. He is risen from the dead.” I may not understand everything, but if I cling to Jesus, I will come through the storms of doubt into calmer seas. To deal with your doubts, make sure that your heart is in submission to God. Then, look to God’s revelation about His Son and hold to it in spite of your difficult circumstances. Jesus will give you aid as you pray, “Lord I believe; help my unbelief!”

In John’s darkness and pain Jesus sent a promise to sustain John’s faith. He will do the same for you.

Confronting fear never ends, but being controlled by it can end. I know I’ve said this before, but I can’t say it enough. Often, when things get worse before they get better, harder before easier, darker before lighter, we doubt. We doubt God. We doubt his calling. We doubt his faithfulness. We give up. I guess he didn’t open that door. I guess he didn’t call me. I guess this isn’t his will. When did God say that it would be easy? When did he say it would be effortless?

Closed doors do not mean that God is not opening a way.

The presence of a battle does not mean the absence of God in the war.

This article appeared in Desiring God, written by Jon Bloom serves as author, board chair, and co-founder of Desiring God. It is an enhance version with my personal story.